You are here: Home / Blog / How starting a new hobby can be a fantastic way to train your brain

A recent study conducted at Oxford University found that practicing a new skill or hobby is not only fun, it can also improve connectivity within the brain.

The study, conducted under the auspices of Dr. Heidi Johansen-Berg of the Department of Clinical Neurology at Oxford looked at a whole new section of the brain, previously unstudied, and discovered that contrary to popular belief, the brain is not static, nor does it degenerate over time. In fact, quite the opposite is true: according to Johansen-Berg “it is possible for the brain to condition its own wiring system to operate more efficiently”.

The study set out to discover change in the white matter of the brain, the portion that conducts electrical signals between nerve cells and connects the different parts of the brain.

The study used a group of 48 healthy, young adult volunteers which were split into two groups of 24 people each. One of the group learned to juggle, with weekly lessons plus 30 minutes of daily practice for a total of six weeks. The second group went about their normal activities for the same six weeks without being taught a new skill. All participants were given brain scans before and after the six week period.

When examining the scans, researchers found that the white matter of the brain for the group that didn’t learn juggling remained unchanged, while the group that learned juggling showed changes in their white matter, particularly in the area of the brain that relates to reaching and grasping in the periphery of vision. In addition, all participants in the group that learned how to juggle showed roughly the same changes in their white matter, regardless of their acquired skill level – suggesting that it is the training what triggers the changes rather than the skill level attained.

The group of jugglers where told to stop practicing after the six weeks concluded and four weeks later they had an additional brain scan. This new scan showed that the white matter of the brain held, and did not decrease, while the grey matter increased, proving that similar to riding a bike, once a skill is learned, it will remain in your head, even when not practiced regularly. 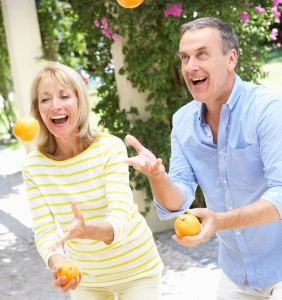 The main learning from the study is the proof that the brain is elastic – which means it can learn, change and be improved as we pick up new skills.  Juggling was chosen as a random skill for this research in order to provide the group with a complex new skill, but in essence, any new skill or exercise works on your brain. The scope of this discovery has the potential to have a massive impact.

Neuroscientists are looking at the possibility to apply this knowledge in many ways, including helping people that suffered from stroke to re-build the portion of their white matter that was lost or damaged.

A large portion of the changes made to white matter occur in the part of the brain that relates to vision, that’s why at GlassesOff we provide the exercises needed to training their brain and improve their near vision, with the aim to eliminate the need for reading glasses. As we get to learn more and more about the brain, we look forward to seeing in which other ways these scientific findings help us develop our brain’s ability to work better and even prevent or treat diseases in ways we’ve never imagined before.

Not a GlassesOff member yet?
Want to get rid of your reading glasses?

GlassesOff is now available in French!